Why Is Innovation Important?

When a new innovation is introduced to the market, adoption typically follows a standard pattern, known as the "Diffusion of Innovation" (E. Rogers, 1962)--that is, a small group of people who instantly jump on board, followed by a somewhat larger group who are early adopters, but still a minority of the population. After some time, the majority joins the party and eventually, the laggards are forced to adopt as well (usually because previous options are now unavailable). Think about the multitude of products that are now in practically every household in the developed world--refrigerators, washing machines, televisions, and more.

The cumulative adoption of the innovation can be expressed by a S-shaped curve (which, if there was only 1 company in the market, would also equal market share). Importantly, the pace of adoption for new innovation is increasing over time, particularly when it comes to consumer technologies (Check out the Harvard Business Review's article, "The Pace of Technology Adoption is Speeding Up" for more details). 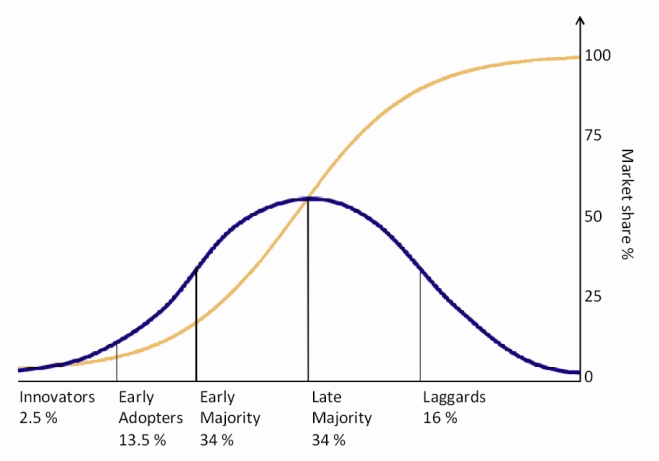 Public Domain, E. Rogers ("Diffusion of Innovations", 1962)
The holy grail of innovation is to be able to move from one S-Curve to another for continual growth. This requires significant investment in new product and service development with the goal being to disrupt your own industry before the competition does. Apple, everybody's favorite business case study, has done this first with the introduction of the iPod and then a series of sustaining innovations with different generations of the iPod and then with the launch of the iPhone (and iPad and probably next, the iWatch). 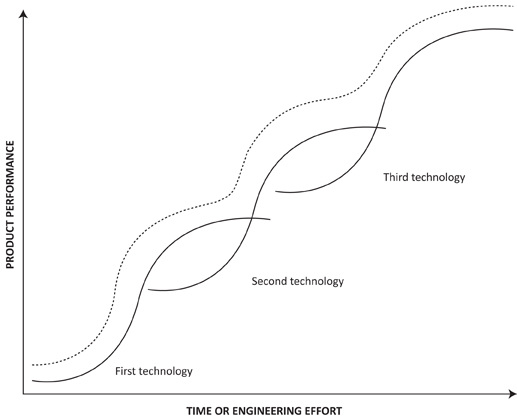 C. Christensen, 1997
"Innovate or Die". "Change is the only constant". "If you're not green & growing, you're brown & dying". Pick your favorite business catch phrase, but the meaning is clear--innovation isn't optional.